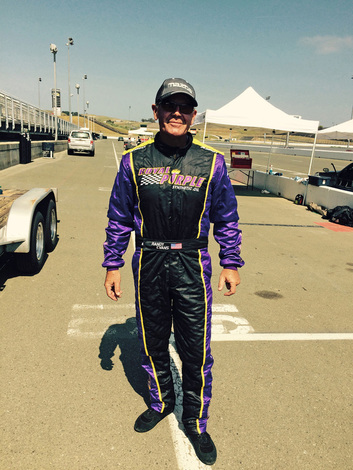 Randy Evans, the main driver for OhmyGodracing, began his fascination with things that go fast way back in 1970. Randy fell in love with motorcycle racing even before he had his drivers license. He started off racing Scrambles (which eventually morphed into Motocross for you youngins), then Flatracking (1/4 mile dirt oval with a steel shoe strapped to your foot), and then eventually Road Racing, the ultimate in two wheel excitement. In 1975 he raced in the pro AFM at Laguna Seca Raceway; he was in second place working on first when his bike developed mechanical woes. That was to be Randy''s last time at a racetrack for a long time.

Twenty four years later, Randy joined the Audi quattro Club and raced their event at SCCA''s Thunderhill Racetrack; he was hooked again! The need-for-speed bug had only been laying dormant and soon he was signing up for various events like the Virginia City Hill Climb and NASA''s HPDE program running at some of Northern California''s great road courses like Laguna Seca, Infineon (Sears Point), and SCCA''s new track Thunderhill in Willows, CA. In November 1999 Randy competed in his first official race—a six hour enduro run by NASA at Sears Point. His buddy Mark Hoover was the co-driver and Mark's son Jason, who had built Randy''s 1990 Mazda RX7 into a race car, was there to help crew. They ended up winning their class that day; Randy gladly bought the Victory dinner that night for the gang. 2000 was turning into an exciting year. Randy continued racing with NASA in 2000-2001 in the Pro Sedan 1 class with the RX7 winning the Points Championship both years.

In 2002 Randy entered SCCA''s San Francisco Region''s Improved Touring S Class with his 1990 RX7. With more competitors in his class, unlike NASA whose venues include Laguna Seca Raceway, he triumphed to win the ITS points championship that year, and repeated the feat in 2003 and 2004!

In 2005 Randy moved onto a new class with a 1992 Spec Miata built by Jason Hoover. This class was fairly new but, well-subscribed and fiercely competitive. It was not uncommon to race nose to tail with 40 to 50 guys flat out for 30 minutes inches apart the whole time. He did very well his first year in Spec Miata and ended up 2nd in points for 2005.

In 2006 Randy contended for the San Francisco SCCA Region''s Spec Miata Championship again, and won it! " It was the toughest season I've ever had, but definitely the most rewarding", Randy remarked. After that it was " take a breather" time, and in 2007 Randy ran a few SCCA events as well as some NASA events, but just for fun.

In 2008 Randy entered NASA''s Spec Miata class with a $1000 prize win per weekend. NASA was trying hard to woo over some Spec Miata drivers from SCCA. Randy did well that year with eight wins! He also won the 2008 NASA Northern California Spec Miata Championship.

These days, Randy is still racing but spending more time managing the rental end of OhmyGodracing, doing some driver coaching and instructing with Nor Cal NASA. Congratulations to Randy on his recent marriage with his beautiful wife Mary, who is often seen trackside with many other of our friends who frequent the pit. Feel free to stop by and say hi when you''re at the track.

Thanks for checking out our website and God bless.